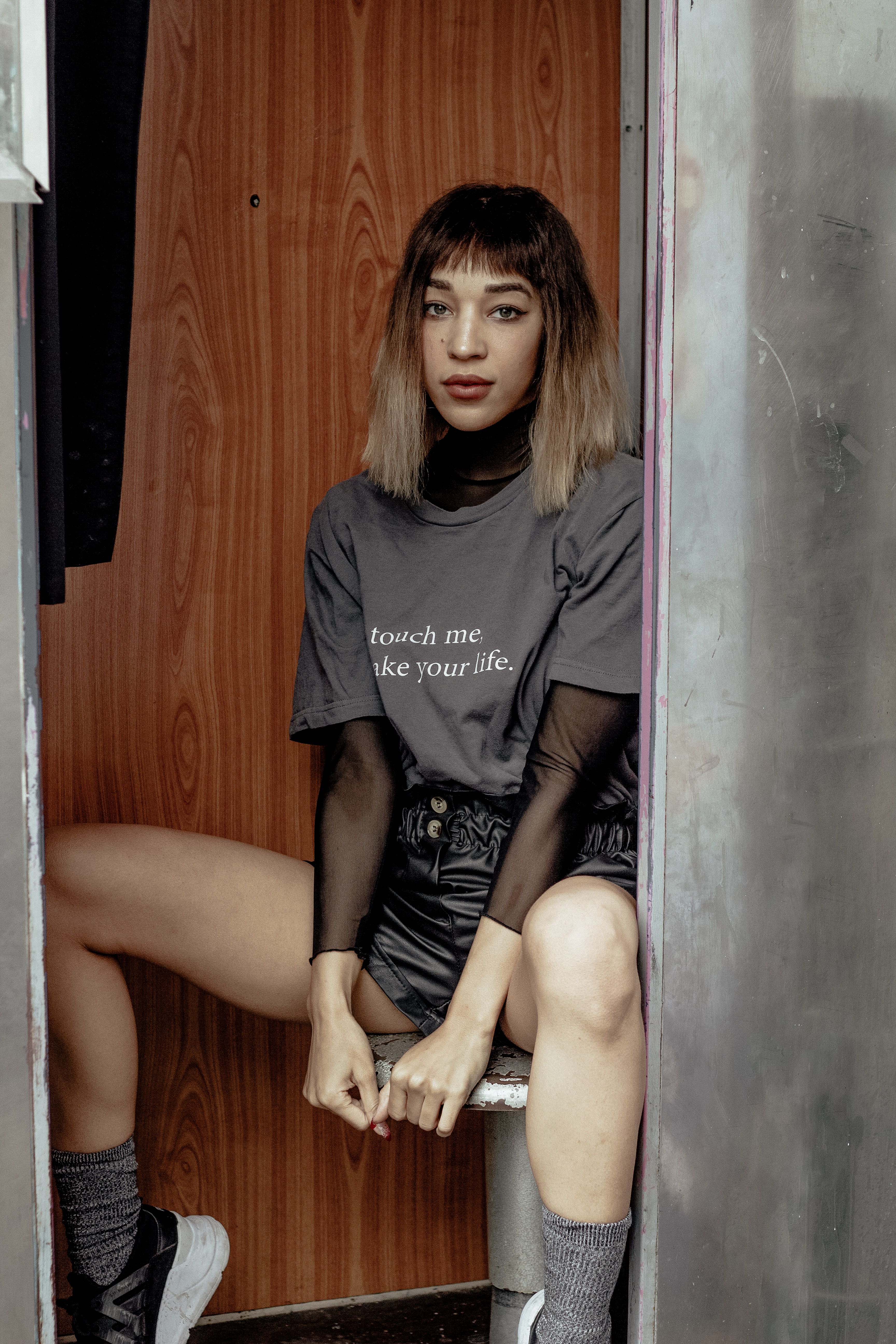 Whether you want to call her Amber Jewe’ll or Bambi Boucher, it’s no question that she’s one of our most talented Pluggers. Amber, aka alter-ego Bambi, has built quite the skillset throughout her time as an influencer. As a graphic designer specializing in brand identity, she not only designs online but in the real world as well — through fashion! Although her interests have now multiplied, she says that fashion was her first love. “I wasn’t into fashion growing up but cultivated a love for it secretly because of my older sister – she always had really cute clothes and would draw these beautiful fashion croquis. On the flip side, I was the derpy sister and I envied her because all of the boys liked her. So, the first opportunity that I got to get a job, I worked at Delia’s and spent my entire paycheck on clothing.”

When asked how she pushed herself to start her account, she replied, “A good friend of mine actually convinced me to start an account showcasing my outfits because to her, I had a good sense of style and I just went with it! I honestly had no idea what would come of it, but it’s become such a great outlet for me considering I’ve always considered myself a bit of a recluse growing up – but I use fashion as a way to express what I want to say.” This passion for expression soon transcended fashion and spread into the world of design as well.

“Funny story, my interest in graphic design began when I was nine years old and I played this game called Neopets where you used HTML/CSS and Graphics to create these groups on the game, and essentially whoever had the coolest graphics got the most people to join. So I downloaded a bootleg version of Paint Shop Pro (now Corel) and would stay up all night either designing or coding – pre Myspace days, but my skills definitely evolved during that time as well!” Throughout fashion and design, her biggest accomplishment was her time working with Dior Beauty, a brand she remembers being so excited that she “ran around [her] apartment screaming her head off.”

She soon took this passion to the next level, and brought it to the platform of education. “Going back to the story of my first job and spending all of my money on clothing – spending all of my money on clothing that didn’t exactly suit me got old pretty quickly so I thought, ‘I’ll just LEARN how to make/alter my clothing!’ I began to look up fashion institutes, and FIDM was the first that fell into my lap. They had a campus in San Francisco, but I wanted to get away from my nest in the Bay Area so it brought me to Los Angeles.” FIDM is one of the reasons she’s lived all around the world (Berlin, LA, SF), but a large part of her traveler’s life is attributed to her own desire to push herself outside her limits. She says, “I truly love culture and immersing myself in new places and experiencing them like a local would! I’ve always wanted to live in New York City, in Tokyo or Seoul, and also South America (undecided which city), but hopefully in ten years I will have lived in all of those places – wherever the wind blows me.”

Although Amber wasn’t trained in fashion until she went to university, she was always talented in creating a personal style — one that has fluctuated and transitioned throughout the years. She says, “Although my style has gotten a lot more feminine over the years, I alternate between that and very dark, sleek and classic cuts and forms. One of my best friends in the whole world is always dressed in suits and dark colours, and I find that because of this, it commands attention and exudes power. I feel like this inspired me as a woman especially, because I find that we have to prove our austerity to the world –  we have to let them know that we’re untouchable.” We know a boss lady when we see one, so watch out, world! 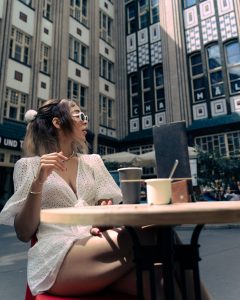 Although she’s lived across the world — San Francisco, LA and Berlin to name a few — Amber maintains that her favorite place is Downtown LA, and we can’t disagree! “Every city has its perks and quirks, but for me, nothing beats Downtown LA. Me and my best friend would scour Santee Allee all the way to Mateo looking for the best deals and making our college money spread the furthest – it’s so nostalgic for me every time I go back!” Her proudest accomplishment was moving to Berlin, which she says was scary but rewarding. “I’m proudest of making the move to Berlin – I’ve always wanted to come here and I was apprehensive at first, but I’m so glad that I’m finally here learning about design in a city with a rich history based in design, art and architecture.” When asked what her favorite feature of The Plug is, she replied, “I love the fact that you can trade contacts on The Plug with other influencers – it’s such an ingenious idea, and it’s helped me a lot along the way!”

When asked to provide us with a couple of tips and tricks, she responded, “[…] stay motivated even when you aren’t motivated, keep making strides, and your authenticity is your biggest asset. Never lose sight of who you are! Also, make sure you have people around you that inspire and support you and reciprocate that energy!” And, although she holds a 86,000+ following today, she maintains that her greatest gift is her friends and family. “The thing that makes me the happiest and excites me the most are my friends and family. Considering they are and always will be my number ones, I often like to think selfishly about them, the world doesn’t deserve them ;)”